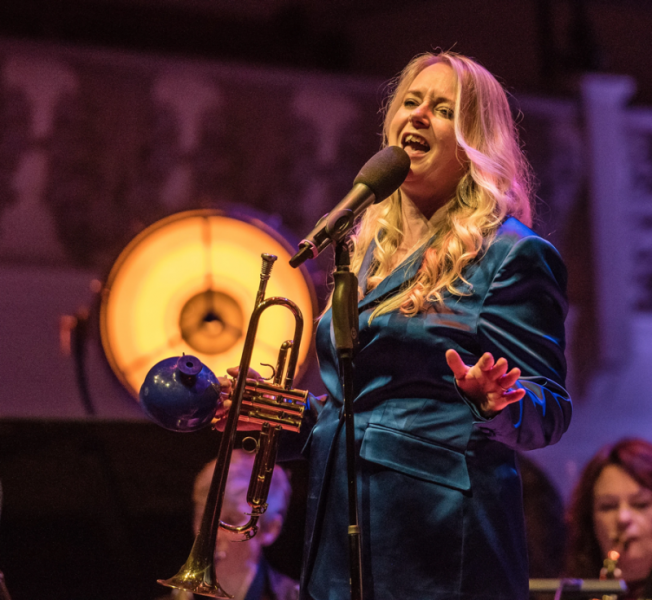 After acquiring a strange and somewhat unfashionable obsession with Jazz and Big Band music at an early age, (and in Wigan!) Georgina began her musical career working as a professional trumpet player almost everywhere up, down, left and right of the country. Working for years with many famous faces, such as Frank Sinatra Junior, Nancy Sinatra and Seal and touring Big Bands in Concert Halls, television and radio, Georgina learned her trade as a lead trumpet player.

Harbouring a desire to wear a posh frock rather than the same as 'the lads' in the band, Georgina decided to make a dash for the front mic! Setting up her own Big Band to play at a local ballroom was the first step to fulfilling her frock and singing ambitions, and when the audience didn't boo (but actually cheered!) she decided that she would like to do it again, quite a few times actually! Georgina's love of making an audience smile, cry, laugh and jiggle was born!

Having sung in and led various sized bands with miscellaneous musicians in some very miscellaneous venues, Georgina decided to record and release her first CD. With support from Jazz FM (CD of the week) and Sir Michael Parkinson ''til there was you' climbed to the dizzy heights of Number 8 in the HMV jazz charts. The critical success of her first album led to Georgina landing her dream job as resident singer with the Ronnie Scotts Jazz Orchestra, where she performs most months. As featured vocalist and trumpet player with the Ronnie Scott's Jazz Orchestra Georgina has performed a variety of shows - Cole Porter Songbook, Big Bands at the Movies, 100 years of Big Bands and has performed repertoire ranging from Maynard Ferguson to Chakka Khan via Ella Fitzgerald and Peggy Lee.

From the BBC Big Band and Concert Orchestra and singing in session with the BBC Band to the Proms at the Royal Albert Hall Georgina's unique talents have captivated and excited audiences of every age!

Georgina now works internationally as a cabaret artiste performing her entertaining trumpet/vocal shows on the world's most prestigious cruise lines. She is also to be found singing with the Echoes of Ellington Big Band and is in great demand performing up and down the country with her trio show and with guest soloist and workshop dates with Big bands both here and In Europe.

She has been really proud to be invited to be a headline performer at a number of Trumpet/Brass festivals around the world including the International Trumpet Guild Conference in Hollywood, where she co-hosting the opening concert with Arturo Sandoval.

“Georgina looks good, has an engaging personality and everything going for her”
Sheila Tracy (BBC Radio 2)

“I've had the pleasure of sharing the Savoy stage with Georgina Jackson on a couple of occasions, on behalf of Children in Need. Her marvellous voice and musicianship, with Ronnie Scott's band, has been a delight.”
Sir Terry Wogan

“That was amazing..... The real deal.....I never thought I'd fall in love with a girl from Wigan, but I did tonight!”
Sir Bruce Forsyth (At Ronnie Scotts Jazz Club)

“The BBC Big Band is joined by one of the UK's finest jazz singers of today Georgina Jackson”
www.bbc.co.uk/radio2

“That was incredible”
Gary Barlow

“…a characterful force to be reckoned with”
Jazzwise

“A talented trumpet player and a singer with a sassy, vibrant style. Her second album, Watch What Happens, puts all of this together and it's a winning combination”
All About Jazz
​
“Georgina is the real deal"
Claire Martin (BBC Radio 3)
​
“The multi-talented Jackson has a vocal presence that is satin, tonally splendid and finger beckoningly seductive....she instinctively demos how to rhythmically milk the best and most meaningful out of both lyric and melody"
Jazz Times